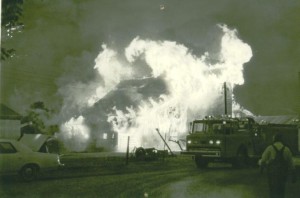 In the early days, Danville was the hotbed of the west central region of Indiana. Socials, dances, and competitions in the mid to late 1800’s always drew large crowds to Danville. The earliest documented fire incident was in April of 1849. A fire occurred at three o’clock in the morning on Locust Corner which was destroyed. Translated to today, Locust Corner is believed to be the Southwest corner of Jefferson and Main Street on the town square. Burton and Tillay Dry Goods, Mr. Crane’s clothing store, Mr. Collins, boot and shoe store, and Mr. Crisher’s Jewelry shop were all destroyed in the fire.

The first record of a department or prevention program for the Town of Danville is listed in 1869. In that year the town passed an ordinance that ordered all property owners to own a ladder long enough to reach the top of the house they owned. To all those who could not furnish such a ladder; one would be bought and paid for by the town, and the cost would be charged to their taxes. Citizens were also liable to a fine of five dollars for each offense against the ordinance.

The first fire warden (Chief) for the town was appointed in 1878. His duties were to inspect and patrol the Town of Danville and report all fire hazards; as well as to have the general supervision of the fire department.

In 1891, the fire district was defined consisting of the buildings at the alley north and all frontage on Jefferson and surrounding streets facing the public square. Another ordinance passed in that year forbade the opening of fire hydrants or sprinkling after the fire bells had rung; until notified by the chief that the fire was out. A fine not to exceed $100 was the penalty for violation of this ordinance. Judge Thomas Cofer was president of the town board.

In 1892, all stove pipes that protruded through the roof were ordered removed and replaced by brick chimneys. This order covered only the fire district. A $3.00 fine was imposed for the accumulation of hay, straw, paper, paper or any other combustible material. This did not apply to such material that was stored in sheds.fire-1

Along about 1900, the Town of Danville purchased a hose cart that was pulled to the fires by the volunteer firemen. This cart was used until about 1908. In 1908, a horse pulled hose cart wagon with 400 feet of hose was purchased. A hydrant system was placed with supplemental water supply from local cisterns. The chief at the time of purchase was Chief J. Cook.

In 1913, a Model – T Ford truck was purchased with a hose bed and two 150 gallon soda acid chemical tanks, which was a big improvement over all the fire fighting equipment that the town had ever owned. The town marshal was also the chief of the department at that time (name unknown).

This equipment was used until 1924, when the town purchased a REO truck with a Howe pump and other fire fighting equipment. The new equipment was delivered at the first of the year in 1925. The membership of the department consisted of: William Walton, Chief, Dode Miller, Glen Brown, Fred Creech, Glen Tharp, Hugh Smoot, Frank Christie, L.R. Christie, and Veo Sanders. The firemen were paid $1.00 per fire for their services

fire-2In May of 1937, members of the town board considered a proposition to secure the old traction station for a fire station and town board meeting room. Glen Tharp volunteered to remodel the building so that it would house the present truck and the new one when the town could procure one. The building was secured on a five-year lease for thirty-five dollars a month. A business building code was also instituted to improve insurance ratings for business owners.

On February 7, 1938, Fire Commissioner, Charles Beasley, ordered bids on a one and half and a two ton truck chassis suitable for mounting the old pump. Mechanical difficulties with the old truck, which was purchased in 1925 were mounting. Estimated costs for the new chassis were approximately $1,200.

March 7, 1938 the department requested the town to float a loan for $3,000 for the purchase of new equipment. The idea of replacing the old chassis was scrapped. Four bids for new equipment were presented with no further action taken.

March 15, 1938 the town board met following the petition of 139 taxpayers and floated the loan for the new fire truck. On May 2, 1938, the Danville State Bank agreed to loan the town $3,000 for the purchase of the truck.

August 18,1938, the order was finally placed for the expenditure of $2,765 to the Howe Firefighting Equipment Co., of Anderson. Howe will provide a 600 gallon per minute pump on an International Chassis.fire-5

October 26, 1938 New Fire Pumper To Arrive Here Friday Afternoon – The new fire truck, a Howe pump mounted on an International chassis was delivered today. Plans were made to form a parade and escort the new pumper in to town in a make shift parade. Many turned out for the arrival of the truck to see the latest gadgets. The trucks total cost came in at $3,629.85.

July 2, 1953 – Four bids were entered with Center Township on a new Pumper to meet state standards for a grant. The approximate cost of $6,500 would be delivered only if the truck meets the state standards.

December 22, 1953 – The new Center Township Pumper arrived and was tested at the Ace Goodwin gravel pit. The new apparatus cost approximately $17,000.00 of which $6,500 was received from the state in the form of a grant.